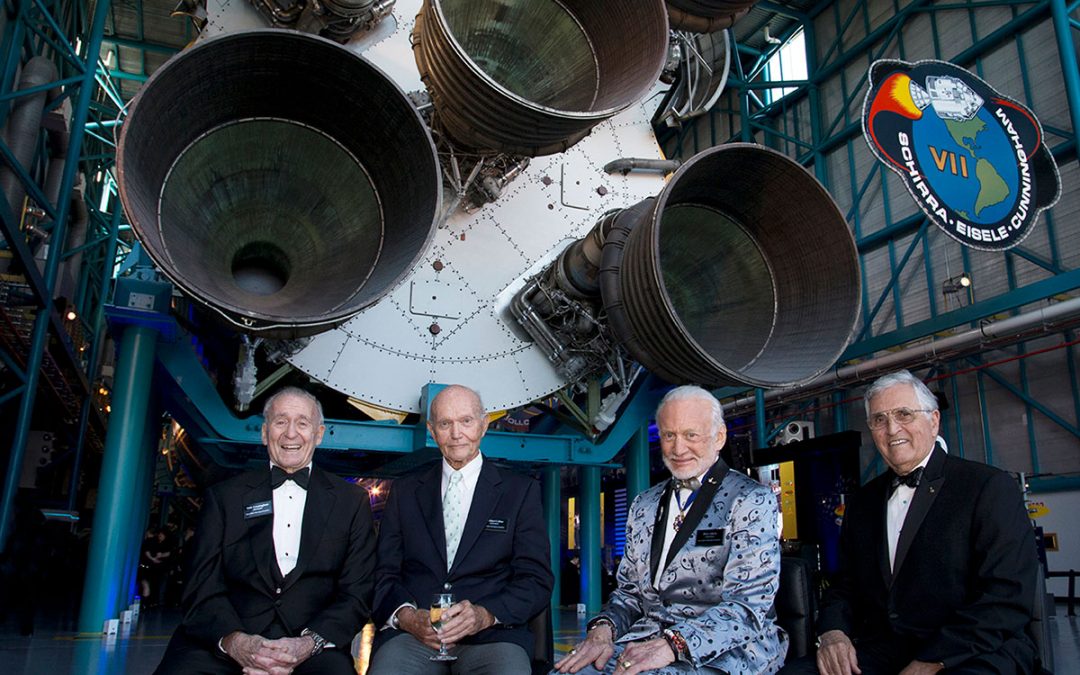 Florida, USA. July 15, 2017: Dr. Buzz Aldrin tonight rolled out a ‘red carpet for the red planet’ at an exciting event to commemorate 48 years since Apollo 11’s Moon landing, and to countdown to the Apollo 11 50th Anniversary in July, 2019. Held under the historic Apollo Saturn V rocket at the Kennedy Space Center, the unique event featured rare appearances, speeches and on-stage conversations between some of the most famous US astronauts and space industry innovators.

Aldrin, the Lunar Module Pilot on Apollo 11 and one of only 12 moonwalkers, was joined on stage by Gen. Michael Collins, Command Module Pilot for Apollo 11, in a rare public appearance. Other astronauts included Walt Cunningham (Apollo 7), Harrison ‘Jack’ Schmitt (Apollo 17), Mae Jemison (the first African-American woman to travel to space) and Terry Virts (Space Shuttle Endeavour pilot in 2010 who also spent 200 days on the ISS in 2015).

The exclusive star-studded event was held to raise funds for Buzz Aldrin’s non-profit ShareSpace Foundation, which undertakes programs that will drive education and help develop the next generation of space innovators who will lead humanity to future habitation of Mars. It is a vision that Aldrin has been pursuing since he returned from the world-defining Moon Landing in 1969. “I’ve been planning Mars missions for decades with my Cycling Pathways to Mars concept to create a permanent human settlement on Mars. We left a plaque on the moon that said “We Came in Peace for All Mankind”. That was the spirit of Apollo and the spirit I want to carry on to Mars. Through the Buzz Aldrin Space Foundation, we are creating educational pathways through my legacy that will create a pipeline from K-12 all the way up through postgraduate level and create the first generation of Martians. With the 50th Anniversary of our first moon landing coming up in 2019, now is the time to remind the world that we can achieve “the impossible” again if we inspire the public through STEAM education.”

At the event, Aldrin oversaw the auctioning of some unique auction lots donated from pioneers in the worlds of space, polar and aviation exploration. Highly collectible memorabilia included a First Day Cover signed by all three Apollo 11 Crew members, flown to the surface of the Moon, a signed, framed sample of Kapton foil from the Apollo 11 Command Module, and a signed, boxed OMEGA Speedmaster ‘Moonwatch’. Significant funds were raised to inspire and enable future generations to make scientific advancements that will lead to humans living on Mars, $57,838 from a silent auction and $134,950 from the live auction.

“This is a wonderful and meaningful honor for me, who as a five year old boy watched the Apollo program that inspired me so much,” said Bezos. “What’s holding us back from making the next step is that space travel is too expensive because we throw the rockets away—we need to build reusable rockets—it’s what Blue Origin is dedicated to.”

The Apollo 11 gala event is the first part of an ambitious three-year fund-raising campaign devised by the ShareSpace Foundation, culminating in the summer of 2019 with a wealth of global activities to coincide with the 50th Anniversary of the first Moon landing. The foundation is committed to driving education in Science, Technology, Engineering, Arts and Math (STEAM) by providing unique and inspirational learning tools. In the past year the foundation gifted 100 Giant Mars Maps all over the US and some internationally to schools and education centers, enabling students to discover Mars first hand via an interactive floor map depicting the topography of Mars, as well as the landing locations of NASA’s Mars robots. The Foundation has global ambitions in the coming year.

The event also saw the announcement of a new non-profit called the Buzz Aldrin Space Foundation (BASF) to educate aspiring young engineers, entrepreneurs, and scientists with the view to creating an educational pathway to Mars. Its President Andrew Aldrin, Dr Aldrin’s son, said: “The Buzz Aldrin Space Foundation welcomes assistance from individuals, corporations and charitable organizations to make each of the foundation’s programs possible. With their help, we can educate the bright, curious minds of creative space pioneers embarking on the greatest challenge of their lives, fulfilling my father’s plan to create a permanent human settlement on Mars. Somewhere out there tonight is a kid who will be the first human on Mars … and she just doesn’t know it yet.”

About the ShareSpace Foundation

The ShareSpace Foundation is a nonprofit organization dedicated to inspiring children’s passions for S.T.E.A.M. subjects. In 1903 man learned to fly airplanes. Only 66 years later we walked on the moon. In order to help the next generation to make giant leaps, we must Educate, Enable and Inspire. sharespace.org