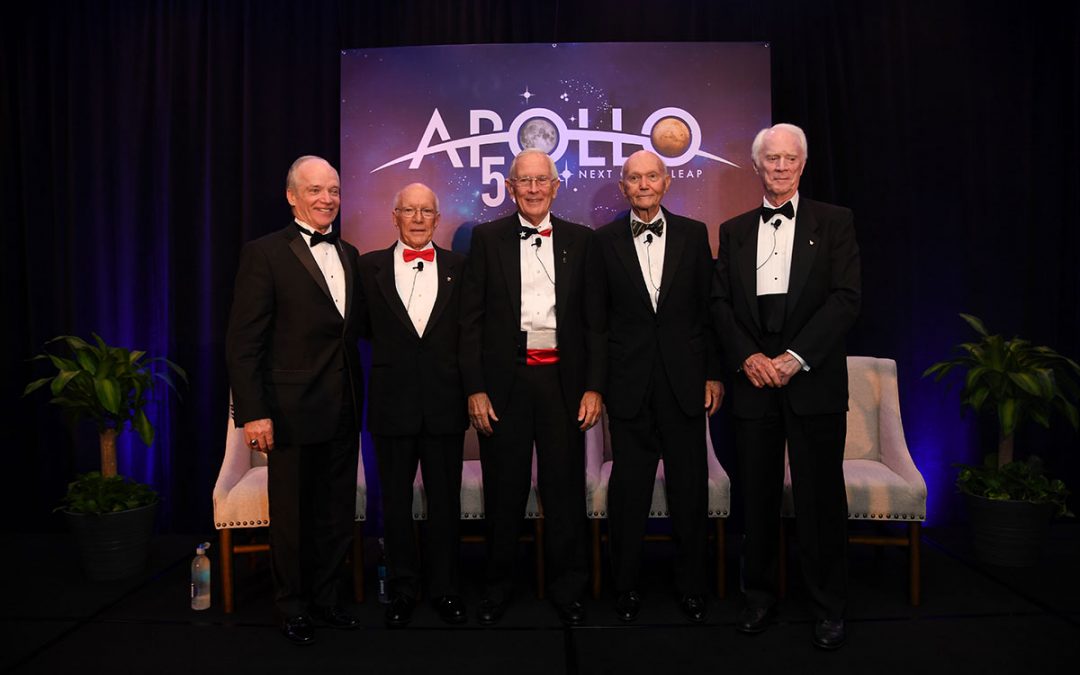 The Apollo 50 TH Gala and After-Party an Epic Celebration of the Launch of Apollo 11 from Florida’s Space Coast on July 16, 1969.

More than 500 guests from across the globe gathered with space legends and celebrities at Kennedy Space Center Visitor Complex (KSCVC) on July 16 for the iconic Apollo 50th Gala and After-Party presented by Northrop Grumman Corporation (NYSE: NOC). The sold-out, star-studded event honored the 400,000 men and women who made the historic Apollo 11 mission one of the great accomplishments of mankind. Proceeds from the event will benefit expansion of K-12 programs of the Aldrin Family Foundation (AFF) and an endowed, university-level scholarship for the Astronaut Scholarship Foundation (ASF) … all to champion a STEAM (science, technology, engineering, art and math) educated workforce.

“Space unites us in a way that nothing else can,” said Dr. Andrew Aldrin, president of Aldrin Family Foundation. “The unforgettable Apollo 11 mission was a moment in time when the world came together to witness and celebrate the seemingly impossible. What an honor it was to gather with so many of the legends that made that historic mission possible and raise valuable funds to ensure we continue making giant leaps in our work in education through innovative STEAM-based programs.”

The Apollo 50th Gala was held under the massive Saturn V rocket at the transformed Apollo Saturn V Center at KSCVC. With a theme of “Space for a Better World,” guests were awed by the stories of legends of the Apollo program. The evening celebrated historic and recent accomplishments with inspiring speeches, special tributes and awards to several unsung heroes, and multi-media content highlighting how Planet Earth has benefitted from man’s giant leaps in technology and engineering over the last 50 years.

Northrop Grumman, a significant contributor to the Apollo program, came onboard early in the Apollo 50th Gala planning as the title sponsor. Its heritage companies played vital roles in the success of the historic Apollo Moon landings, most notably, design, assembly, integration and testing of the famed lunar lander.

“We are proud of our legacy of contributions to one of the world’s finest technological achievements – the Moon landing,” said Charles Precourt, vice president, propulsion systems, Northrop Grumman. “What an honor it was to be a part of an event that celebrated all of those accomplishments, while helping to ensure we have the necessary education programs in place to inspire our next generation of explorers.”